Most of our rounding methods are based on arithmetic rounding.
Please refer to the nomenclature described in Residue Class Rounding. So we can base our rounding on a metric and the most obvious choice is the absolute value of the difference of the two parameters,

. That is what everybody does and nothing else really comes to our mind when we are talking about rounding. But this approach is based on the additive structure of our field or ring containing the numbers that we want to round. Another way of looking at this is that (in case we are talking of real numbers or some subset thereof) the choice of the rounded value is mostly based on seeing on which side of a boundary between the two candidates for the rounded values the original value lies, with special handling if it is exactly equal to this boundary. Now the this boundary is the arithmetic mean between the two candidates, therefore we call this arithmetic rounding. Just to give you an example:

We look at the „middle“ between two allowed numbers, for example usually something like

when rounding a number between

to integers and automatically assume that above that middle we round up, below we round down and exactly on the boundary we need additional rules. This middle is the arithmetic mean of the two neighboring allowed numbers after rounding and hence we can call this arithmetic rounding. All numbers

are rounded to two, all numbers

are rounded to three.

, so each real number should be rounded to an integral number. Also we assume

Now assume we have a non-integral number

and an integral number

. For convenience we write

serves as boundary. Now there are many other ways to define a mean between two number

. Some of the most common are

We could also define a arithmetic-harmonic mean in a similar way, but that is just the geometric mean. It is an interesting way to approach the geometric mean of matrices, which is somewhat hard to define otherwise because of the non-commutative multiplication.

For the users of spreadsheets, like included in LibreOffice, OpenOffice or MS-Office, you can find the arithmetic mean as function average, the geometric mean as geomean and the harmonic mean as harmean.
Others means can be defined along these lines. And we can see that:

Here is a visual explanation of arithmetic, geometric and harmonic mean: 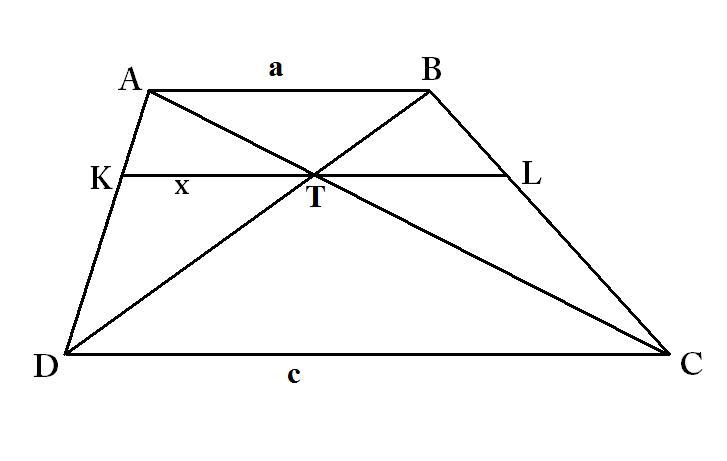 from K to L has the harmonic mean of

The ruby-gem long-decimal supports all of these methods for calculating a mean.

Just to give you an idea that you can extend this further, the geometric and harmonic mean are now considered.
As can be seen negative and zero values for

are causing some trouble or require some care. Actually we can deal with this by splitting our unrounded and rounded worlds into separate parts, here we take the number

as three different sets and do the rounding within them:

In a similar way we define

separately. Then we just look at one partition

and consider rounding to be a mapping

The obvious assumption of rounding

releaves us from dealing with logarithms of zero or division by zero. We would see that anyway any number between

would be rounded to

for both harmonic and geometric rounding, because the boundary is 0, if we pick the right variant of the formula for calculating the mean. Also between

everything is rounded to

in our example. Otherwise the calculation of the boundary can be made to work, because then both factors are negative, so we draw the square root of a positive product, but then we need to replace the square root by its negative counterpart.

So for geometric rounding we define that

has to be defined by additional rules. But we define

for negative values of

. This can also be expressed in terms of a metric:

Harmonic rounding is definable in a similar way:
We define that

has to be defined by additional rules. This can also be expressed in terms of a metric:

Quadratic and Cubic rounding can be defined in a similar way. It would even be possible to go for arithmetic-geometric rounding or harmonic-geometric rounding, but that would imply having to do an approximative iterative calculation of the boundary each time it is needed, while the rounding modes described above can still be achieved with relatively simple multiplication and addition operations.

In any case it is necessary to define the rule how to round numbers that lie exactly on the boundary, unless we can prove that the boundary is irrational.

That is the case for geometric, quadratic and cubic rounding, because if we have adjacent integers

then we see that

cannot both be squares, so there is one prime number that divides either

with an odd multiplicity, which already ensures that the square root is irrational. For the quadratic mean we have

, where the numerator of the fraction is odd, so two occurs with an odd multiplicity, which makes it irrational again. The similar argument applies for the cubic mean. For the harmonic mean we have

can be a power of

, in which case we have to deal with the boundary issue.

The ruby-gem long-decimal supports geometric, harmonic, quadratic and cubic rounding in addition to the regular arithmetic rounding, that is referred to as „half“.

Harmonic and geometric rounding are important for some of the mechanisms of rounding with sum.
Based on this basis these algorithms will look more natural and no longer like some weird approach that needs to be copied from some untrusted source just to get over the nightmare of having to solve that issue.